The brain is irrigated by 4 cerebral arteries, which are divided into anterior and posterior axes.

The anterior axes are:

The left and right common carotid arteries, which divide in the neck into external and internal carotids

The internal carotid has only one collateral artery : the ophthalmic artery 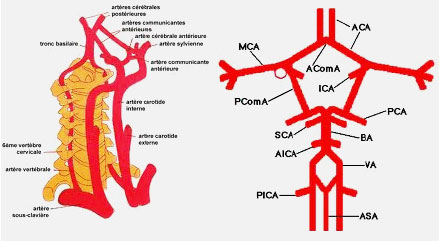 In man, the carotid bifurcation is located in the neck, about 2cm above the Adam’s apple and on both sides of it.

The posterior axes are the right and left vertebral arteries, which start from the subclavian artery at the base of the neck and joining in the skull to the single basilar trunk.

There are anastomoses between the anterior and posterior axes, between the right and left in the Willis Polygon. 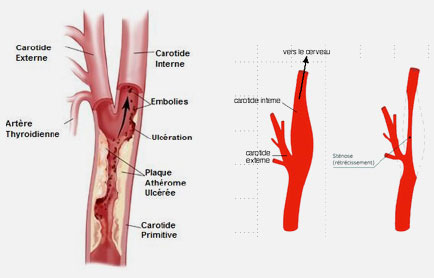 The carotid stenosis can be:

Moreover, it can be:

The clinical manifestations depend on the location and the size of the affected cerebral area.

The symptoms of carotid are:

The review will also look for other locations of atherosclerosis:

The diagnosis is based on the Doppler, CT and/or MRI, rarely on arteriography.

The fight against vascular risk factors through lifestyle modifications allows patients to hope for the stabilization of lesions. These risk factors are:

Tobacco that multiplies the risk of stroke by 2. The risk falls to 1.2 for ex-smokers

Diabetes that increases the impact and seriousness of cerebral infarctions

Hypercholesterolemia : its role is less important than for other atheromatous localizations

This type of treatment is adapted to moderate or averagely tight stenosis (for which no surgical procedure is needed) and after the operation (for tight stenosis).

This therapy has proven to be efficient: decrease of strokes by over 20% and of myocardial infarctions by 30%.

The anti-platelet’s duration of effectiveness is the one of platelet’s regeneration – that is to say about one week – and their after effects are mostly digestive.

The reference medications are: 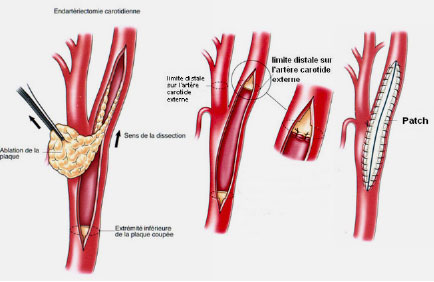 An intervention is needed for tight stenosis over 70-80% and for symptomatic carotid stenosis.

It can be performed under local or general anesthetic with a mortality risk lower than 3%.

The technique of expansion of carotid bifurcation’s lesions is now well codified.

It is based on the coverage of the entire lesion by a stent, and the systematic use of a cerebral protection system. Results could be improved thanks to the systematic prescription of a mix of aspirin and clopidogrel in the days following the procedure.

For now, this technique is restricted to a few special cases, when endarterectomy cannot be performed.